The year that was...

And that year was an almost complete miss for any sort of naval activities here.

After a promising start with Galleys & Galleons, hobby-wise my naval activities just fell flat.  I'm not certain why.  But, my lovely wife has pointed out a few details, and I am getting ready to try again.  She commented on an issue that did not really click until recently - scale.  In her opinion, the miniatures are just too small and that might be a source of friction.  So, I am going to dig out the 1/600 ancient ships again and see if I can plug them into their original purpose as ships for Tékumel gaming.  Galleys & Galleons will be a perfect set of rules for them.

As a back-up plan, I have placed a small order for some 1/1800 ships from War Times Journal, but with my luck the order has fallen afoul with technical difficulties on the production end.  I look forward to their arrival - just a bit more patience.

And, if you are curious as to my other gaming pursuits, please take a look at Pewter-Pixel Wars.

Sometimes, web surfing can result in completely unexpected goodies.  While bouncing through the 'Trending' topics on The Old Reader, I found a link to a very interesting PDF on ancient Egyptian maritime activities:  Foundations of International Thinking on Sea Power

I have only just started to dig through the Egyptian pdf, but there is a section on maritime activities as based on archaeological findings that could be very useful.

The link above also lists a history of Japanese naval matters that could be of use.

These documents are part of a larger collection:  RAN Publications.  There is a large collection of documents there, with topics ranging from WW1 to the present.  Most of them are concerning the operations of the Royal Australian Navy, including ASW reports and merchant ship movements in WW2.  Go take a look!
Posted by El Grego at 10:39 No comments:

Now that I have some ships together (see previous post), my thoughts have turned to getting them painted.  First, primer.  I have found that my usual primer, Reaper Master Series Brush-On Primer, has seen better days and has mostly settled out in the dropper, even after much shaking:

The two on the right were 'primed' with my remaining Reaper primer - you almost can not tell that there was anything there.  The pair in the middle were coated with Vallejo Surface Primer.  While the coverage is good, this stuff has a bit of a stench to it, and I do not think that I will try it again.  On the left pair, I used a 1:1 mix of white gesso and grey gesso.

The gesso seems to be working OK.  I have used gesso before, but mostly on 28mm figures and I am concerned about covering in details on these small ships.  The gesso is not fully cured, though, so we will see...
Posted by El Grego at 19:34 2 comments:

New blog, with a painting tutorial

A new blog (not mine  :) ) has sprouted up - The Great War at Sea by Grant.  He has posted a two-part painting tutorial, with Part 1 here and Part 2 there.

He has some beautifully painted 1/2400 GHQ miniatures - take a look!

After a multitude of delays, from holidays to a pronounced avoidance of the painting table, a small measure of progress has been made.  Here is a pic: 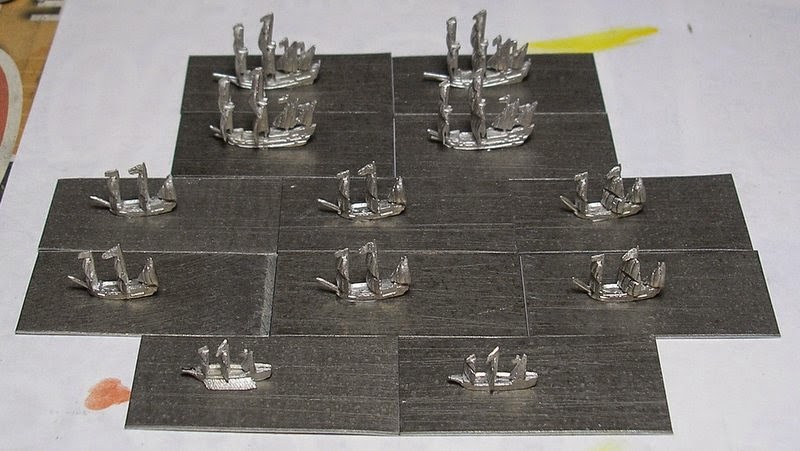 This is the assembled Figurehead small English squadron for the Armada period, in 1/2400 scale.  These vessels are not very large - those bases are 40mm long and 20mm wide!  But, for small miniatures they are very nice.

Here are some close-ups:

The largest ships are these:  FR30 Race built galleons, based on Ark Royal.  One can see that there is a good amount of detail, including flags from each mast.  These miniatures are three-piece kits, with the fore and main masts being separate from the hull.

The other two large galleons are:  FR31, based on Revenge.  These are also three piece miniatures.

Here are three of the six small galleons (FR32).  This pic only shows three, as I had misplaced the other pack until just before the squadron pic was taken.  In contrast to the larger galleons, these smaller galleons are one piece castings, making assembly just a matter of removing a small amount of flash and making sure the bottom of the hull is flat.

Last but not least:

This is pack FR34, showing a large pinnace (left) and a galleass (right).  One piece castings, these small ships still have a lot of detail.


Unfortunately, my slow pace of assembly/painting means that the next game of Galleys & Galleons will use the counters again...
Posted by El Grego at 15:23 4 comments: