Lorenzo at Dadi & Piombo has a new set of rules for ancient naval battles - Impetus Navalis - for large scale actions. The PDF download is here. A brief scan of the rules indicates that you might need a copy of Impetus to use them. Some interesting concepts in there!

Another, much older set of ancient naval rules is De Bellis Navalibus - based on DBA they are simple yet subtle. I hope to give them a try sometime, or better yet convert them to a more Renaissance-era style...
Posted by El Grego at 06:33 1 comment:

Daveshoe has started up a brand-new blog on naval gaming - take a look!
Posted by El Grego at 05:53 No comments:

It has not been all Ironclads work here - the WW1 ships have been getting some attention also. And to prove it, here are some work-in-progress pics: 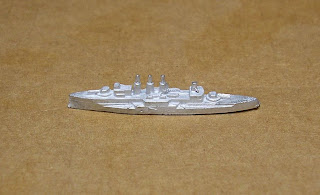 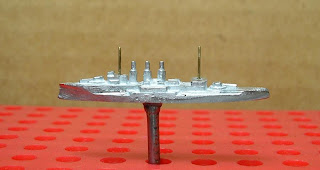 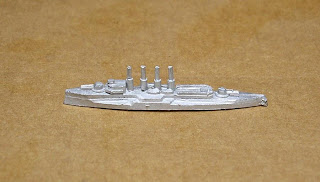 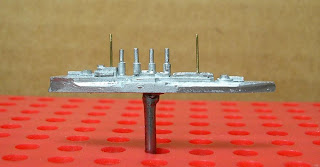 
Both minis required a bit of work with knife and file, and I see that I missed a gap in the second stack on Roon. Nothing too serious though. I do think that these will paint up faster than their WTJ counterparts, as the Navwar minis have a bit less detail. Once all of the ships are on the table, fully painted, it will not matter much.
Posted by El Grego at 17:56 1 comment:

I sat down at the hobby table to try out an idea for the Figurehead ironclads. Almost all of these ships come with spars and sails set as a separate piece from the masts. Steam-driven ships would not normally have their sails set especially in a battle so it does look odd for the ships to be equipped this way. So, I have tried an experiment to make a ship look better: 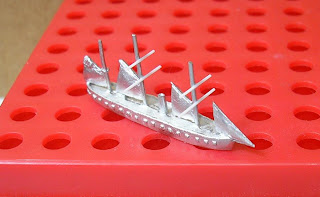 Here is Re d'Italia with new spars added to replace the sails. 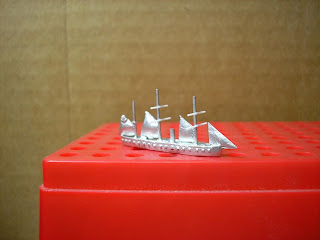 I used the original sail pieces to get the length of each spar. The new spar is a piece of thin plastic rod. Then, I notched the mast with a sharp knife at the location I wanted a spar, to maximise the surface area for the glue. Add a bit of super-glue, and the spar goes on. After it dried I added another small drop of super-glue to the join to coat over the entire area, hopefully to strengthen it.

What do you think? To me it looks good; I don't think that I will try to add furled sails to the spars. I am worried that they will break from handling during game-play, but hopefully the players will listen when I tell them to handle the ships by their base! I am also going to leave the jib and stay sails on the ship; that might be a bit too much...
Posted by El Grego at 19:39 3 comments:

Regina Maria Pia with a little bit of paint applied, and

Progress has been slow through the previous month due to a really odd work schedule which should be resolved now. These Figurehead ships do seem to paint up nicely so that helps.


And the WW1 fleet has not been forgotten: 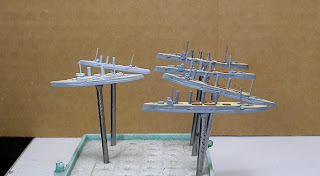 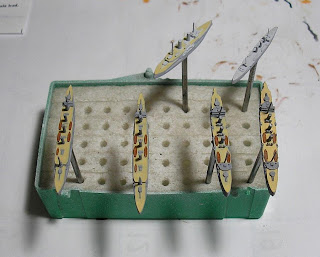 Before I set off to the balmy shores of the Med for WW1, I am going to finish off the ships for my Götland scenario. Painting is helping with my strange urge to purchase those 'lovely' French pre-dreadnoughts - I really do find the French designs to be strangely attractive!
Posted by El Grego at 10:19 5 comments: