I think that I have a good idea of what the US force will have available for Plan Rubber, plus a couple of additions.

During March 1942, all of the above ships, excluding the battleships, were formed as TG22.7 for a brief time, patrolling the Caribbean and Atlantic near Bermuda.  The battleships were being used as convoy escorts. shuttling back and forth from Maine to Iceland.  This, I feel, is a good basis for my Plan Rubber US force.

Additional forces could be drawn from the following:

CA Tuscaloosa  -  assigned to the US Atlantic fleet, she spent much time operating with the Royal Navy as a convoy escort.  As USS Augusta is a thin-skinned Northampton-class heavy cruiser, the better balanced New Orleans-class Tuscaloosa would be a good option.

DD Rowan and DD Hobson  -  these two destroyers were just coming off time in the yards for refitting and could be available for escort duties.

CVE Long Island  -  the first US escort carrier, USS Long Island spent much time as a plane ferry later in the war.  For Plan Rubber, I envision her with a small deck-load of USAAC P-40 fighters to be flown off for use at a captured Brazilian airfield, and her normal naval aviation complement - stored on her hangar deck - would be available afterward.  She would be very vulnerable prior to the flying-off, but there is a lot of potential with more US aircraft in the air.
Posted by El Grego at 18:17 2 comments:

When it rains, it pours sometimes... Just when I thought that I had figured out a simple WW2 project, I find something else that catches my fancy.  Here are the two candidates:

Plan Rubber - US forces try to invade Brazil to insure the security of airbases in Northern Brazil, vital to the transfer of aircraft from the US to Africa/Middle East/Australia.


Plan Rubber, although hypothetical, has a lot going for it.  Most of the US forces are available in miniature from GHQ.  It can be limited in scope, or expanded.  I am thinking of two different starts to this project.  One, the US invades in March 1942 and provokes an angry reaction from Brazil, and two, Brazil has already turned to an Axis puppet and the invasion is an Allied reaction.  The first option I think would make a great short campaign, starting after US forces make their initial landings and focusing on the Brazilian reaction.  The Brazilian forces would not need as much added, although they would still be much better than their historical counterparts, as the Brazilian dreadnoughts were barely functional at this time and there was a severe lack of modern destroyers.  The second option would see a greatly augmented Brazilian navy and air force operating against an Allied (US/British) force.  So, there is a 'Small Solution' and a 'Large Solution' for Plan Rubber, which would allow for the inevitable desire for project creep.

The Med is being sparked by the soon-to-be-released Bretagne battleship miniatures by GHQ.  Again, this would be a project that could start small and expand.  GHQ makes most of the classes of the Italian Navy (except for some destroyers and smaller) while the French fleet is growing.  Project creep for The Med would include adding Royal Navy units.

Both plans have interesting features, and I have suitable miniatures for each of them.

Looking at a WW2 naval project...

After a little bit of digging I was able to find a good quantity of GHQ WW2 naval vessels in various states of disrepair.  Many of them look like this: 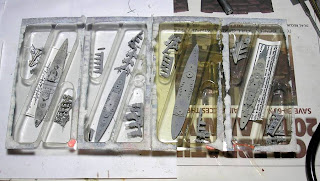 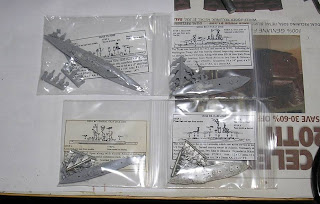 Quite a disparate bunch.  Unfortunately, Littorio and Strasbourg have various amounts of paint, which would need to be stripped as I am certain that I no longer have those hues in my collection.  The others pictured above, along with Rodney and Barham, are bare or in primer.

The ships I have lean somewhat towards the Mediterranean campaign, but another idea struck me while digging for these miniatures.  I found this magazine during the search: 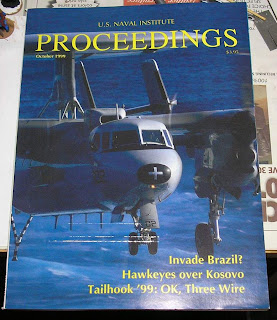 Inside, there is an interesting article: 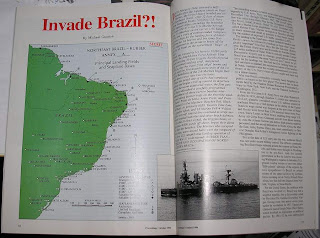 The article details the planning that occurred in 1941 when policy-makers in Washington DC thought that Brazil might become pro-Axis.  While it seems to be a stretch of the imagination today, the population of Brazil contains a number of German emigrants and some of the Brazilian army officers were thought to side with the Germans.

The map above is perfect for the task, detailing airstrips of various sizes and the capacity of the ports.  The real task is assembling the miniatures for the campaign.  GHQ makes most of the US ships - including Texas and Arkansas which I have in my possession.  Panzerschiffe makes the Brazilian dreadnoughts Sao Paulo and Minas Gereas.

There is a lot of room for adding more forces to this what-if scenario.  Some of them are mild, such as adding German aircraft squadrons and U-boats.  Some are wild - adding Graf Spee and Prinz Eugen to the Brazilian fleet.  And there is the truly fanciful, with Bismarck and French ships making their appearance.  But I have to admit that the strangeness adds to the appeal, for me at least.
Posted by El Grego at 10:22 4 comments:

Well now, another fork in the road of hobby project completion looms up ahead.  Recently, I have been playing the on-line game World of Tanks.  This has stirred a latent desire for micro-armour, something that I have not played for more than a decade, and collected longer than that.  So, I zipped over to the GHQ Models web site, checking out tanks and such, when the urge to look at the Micro-nauts hit me.  Those beautiful miniatures, albeit expensive, are a siren's call.

I have some old GHQ ship miniatures around here, so I am going to drag them out and see if I can paint them to a reasonable degree...
Posted by El Grego at 15:43 3 comments: