Not much is happening here on the hobby table as far as naval projects go, but hopefully that will end soon enough.

I have purchased a few books to help stoke the boilers a bit: 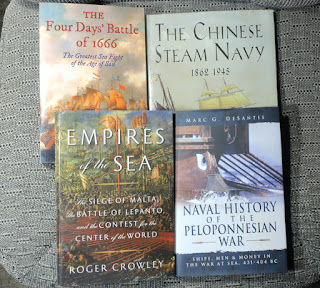 Many directions these tomes lead!
Posted by El Grego at 20:00 9 comments:

A bit too much time away from here, don't you think?  I have not had much desire to work on naval stuff lately, despite having several projects deserving attention.  One has to start someplace so let's go: 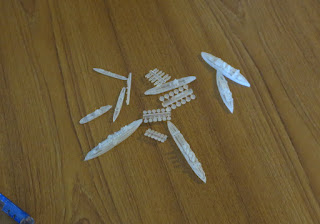 Here is my first group of ship models from WTJ.  These are assorted pre-dreadnoughts in 1/1800 scale.  US, Spanish, Japanese, and Russian vessels are pictured as they await some attention with soapy water and a brush.

After that, I need to make masts and figure out how to base them...
Posted by El Grego at 13:04 6 comments:

With my recent order to Waterloo Minis, I added a sampling of the Langton War of 1812 ships: 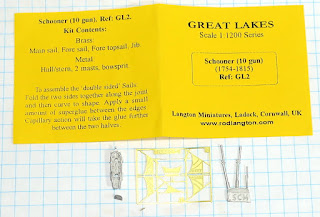 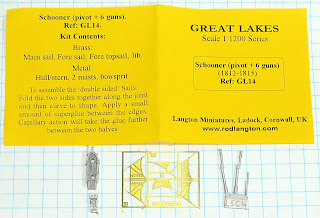 Here we have a pair of schooners that could be used for either faction on the Great Lakes.  Each model is comprised of five cast pieces - hull and masts - and a set of photo-etch sails.  Beautifully cast in the Langton manner, and oh my, are they small.  Each square on the grid in the pics is ¼" (6.35mm) - the hulls are less than 1" (25mm) in length.
Posted by El Grego at 05:00 1 comment:

The second pair of miniatures for my Anglo-Dutch naval project recently arrived.  These ships are Langton, and they were purchased through Waterloo Minis: 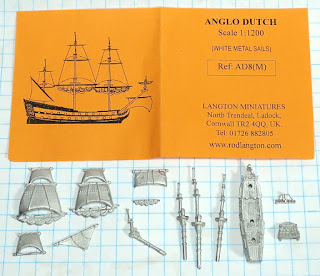 This is Langton AD8, a British 4th Rate vessel, 48-56 guns.  13 pieces total.  I decided to try cast sails for this batch, just to see how much difference there will be in assembly compared to the photo-etch variety, plus they were a bit less expensive.  Beautifully detailed, as one would expect from Langton. 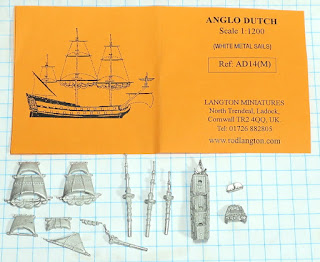 This is Langton AD14, a Dutch 4th Rate of 46 guns.  Again, 13 pieces make up this model, and again beautifully detailed.  It is interesting to note the size difference between the two 4th rates - the British ships are a fair amount larger than their Dutch counterparts.


The easy part is now complete!  Next is to figure out basing and rigging essentials, as I want to have all of the supplies present before I start any assembly.
Posted by El Grego at 07:30 3 comments:

As part of the build-up to my Anglo-Dutch naval project, I purchased a copy of this: 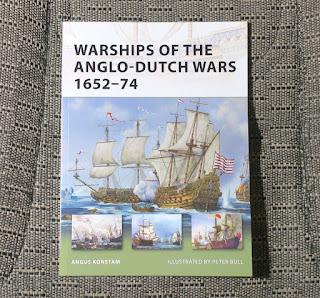 This volume is part of the 'New Vanguard' series from Osprey, number 183.  A slender volume at 48 pages, it is nonetheless a useful introduction to the period.  Design, construction, and operation of the two different navies are covered, and there are many period paintings reproduced within, along with  color plates commissioned for the book.  The most interesting part is a series of tables listing the names, rates, and fates of individual ships from the two sides.
Posted by El Grego at 13:39 2 comments: